Preparations (candles, medicines) for the treatment of cytomegalovirus

What is dangerous cytomegalovirus: implications and complications of infection

What is the rate of antibodies to CMV in blood

How is cytomegalovirus: ways and means of infection

Home / Topic about sexually transmitted diseases / All about the spread and treatment of cytomegalovirus / Cytomegalovirus infection in pregnancy: normal, consequences of positive antibodies IgG and IgM, treatment

Cytomegalovirus is a common worldwide virus related pathogens smallpox and diseases Epstein-Barr. Leaking asymptomatic or as mild illness in healthy people, CMV infection is dangerous for immunocompromised patients and the developing fetus.

The mechanism of infection and prevalence

To be infected with cytomegalovirus can be from blood transfusions, organ transplants. An infectious agent is also transmitted sexually and through airborne droplets. From mother to child the virus gets through the placenta in utero, during childbirth and while breastfeeding.

Cytomegalovirus infection is widespread. In different parts of the globe the number of speakers ranges from 40 to 100%. Ways of infection, the severity of symptoms can vary greatly, but only a few people do not get this infection in their lifetime.

People with a normal immune system can easily cope with acute infection caused by cytomegalovirus. In the future the infectious agent is in the body, but has no effect on the activity of the systems and organs of the carrier. The disease is dangerous only when it occurs on the background of reduced immunity. The special issue is a combination of her pregnancy.

In developing countries the peak incidence occurs in childhood. In economically developed countries people are more likely to become infected in later years. In the United States and Western European countries 50% of young people in the age of marriage have not been infected with this virus.

The incubation period of the disease is 9-60 days.

Cytomegalovirus is the most frequent pathogen of congenital infections. Moreover, it is the most common viral cause of mental retardation.

It is essential to understand the following fact: while a healthy adult carries cytomegalovirus infection without any consequences, infection of the fetus inside the mother's womb often leads to serious developmental disorders.

Cytomegalovirus during pregnancy is most dangerous if infection of the mother occurred the first time. In this case, it is transmitted to the fetus through the placenta with a probability of 30-40%.

Women who test positive for the presence of class G antibodies to cytomegalovirus (put simply, had been ill previously) the likelihood of transmission of the virus to the baby is 1%.

From the point of view of possible consequences of the most dangerous development of infection in the first trimester of pregnancy.

In rare cases women, earlier history of this infection can become ill during pregnancy due to reactivation of virus due to impaired immune forces. Like other herpesviruses, cytomegalovirus, once causing the disease remains in the body"dormant" form and is activated by reducing the immunity is below normal.

The risk of infection to the fetus

From 85-90% of children who were infected in utero with cytomegalovirus, immediately after birth there are no symptoms of the disease. Most of them will not have consequences of defeat in the future.

In 5-15% of children infitsirovanija in utero, but no signs of disease at birth, will manifest symptoms associated with CMV, most often deafness. Also to the effects of the disease include decreased intelligence, impaired vision and speech.

The impact of the virus in the early stages of pregnancy can lead to fetal death.

If the virus gets into the baby's body through breast milk, healthy baby transfers the infection as the healthy adults with little or no symptoms.

Usually in people with normal immunity, the infection caused by cytomegalovirus, goes unnoticed or causes mild symptoms similar to SARS.

During the acute phase may increase lymph nodes and spleen. Sometimes CMV causes a picture similar to mononucleosis (infection with the Epstein-Barr): a person has a sore throat on the background of enlarged lymph nodes and fever up to 38-39 degrees.

In patients with lowered immunity, e.g., HIV infection, cytomegalovirus can cause pneumonia, myocarditis, meningitis, and other diseases of any organs and systems. 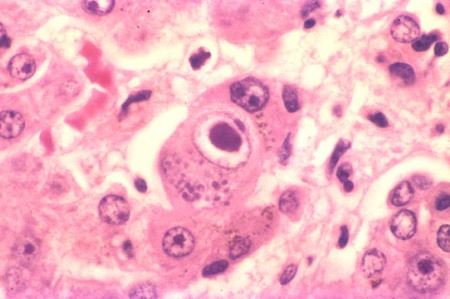 This type of diagnosis is accurate, easy to decipher and so the doctors it is widely used. Using polymerase chain reaction (PCR), can detect the presence of virus in blood and other tissues of the body (DAB).

A few words about interpretation of results: normal qualitative PCR in cases of suspected infection is the absence of the virus in the test material.

Cytomegalovirus infection in pregnant women may be determined bystudy of the biological drug. A tissue sample from any organ of the body look under a microscope. Painted in one of the common ways you can see the smear characteristic symptom of CMV damage to the cells – so-called "owl eyes". Normally it is not defined.

Diagnosis of CMV lesions in the fetus

Cytomegalovirus in the fetus before birth can be detected through studies of amniotic fluid using PCR. If the answer is PCR positive, it is assumed the presence of intrauterine infection, however, its impact on the fetus cannot be established in this analysis.

For the detection of abnormalities arising under the action of the virus, used ultrasound.

Identifying the unborn baby of immunoglobulin M to cytomegalovirus in the first 2 weeks of life speaks of intrauterine infection.

Treatment of cytomegalovirus infection in pregnant women is not an easy task. Many antiviral agents can cause malformations. Therefore, in most instances, antiviral therapy is not carried out.

The need to treat the pregnant patient may occur if she has immunodeficiency and developed cytomegalovirus defeat life-threatening. But the prognosis for a fetus with this treatment adverse.

Given the complexity of the treatment during pregnancy, the main role in the fight against cytomegalovirus plays a prevention.

A frequent question being asked by women for family planning: is it possible to get pregnant if you had previously had CMV disease. Getting pregnant is possible, the probability of infection of the fetus in such a situation does not exceed 1%. This is not the fact that this percentage of children will occur in the future complications.

Much more dangerous primary infection of the mother during pregnancy. In this regard, it is important to the education of women. Pregnant women who do not have antibodies to cytomegalovirus, should avoid large crowds and be aware of the dangers of unprotected sex.

The important role played by infectious screening in the early stages of gestation.