How is Mycoplasma (mycoplasmosis): routes of infection

What drugs treat Mycoplasma in men and women

Effective treatment of mycoplasmosis is possible only at observance of several conditions. First, take medicine should at the same time a man and a woman. Otherwise, the subsequent sexual acts occur re-infection, and all treatment will be useless.

Immunity to Mycoplasma, which would protect from re-infection is not formed. Even if the second partner has no symptoms, and Mycoplasma not detected by PCR examination, he still needed the pills.

At the treatment stage due to the use of antibiotics will also have to exclude the admission of alcohol and irritating spicy food. Oral antibiotics should be combined with local therapy candles.

The complexity of treatment of mycoplasmosis

In addition, the germ cannot be detected in the normal smear, it is not always amenable to cultivation on nutrient media. Thus, M. genitalium is almost not growing on the culture medium, due to which the testing of the antibiotic impossible. In this case, the doctor has to choose the drug for treatment solely according to the medical history of patients.

Antibiotics previously used a man and a woman for the treatment of Mycoplasma or other infections, has not appointed. This is because Mycoplasma can be resistant thereto (resistant).

This antibiotic is able to block protein synthesis in Mycoplasma. In normal concentrations it inhibits the growth of microbes and higher completely destroys them. The drug is well absorbed in the gut in pill form, in addition, has an affinity to the urogenital organs where it accumulates in greatest quantity.

However, the use of "Erythromycin" when pregnancy is not desirable due to its penetration through the placental barrier. The drug is also excreted in milk, so it is not prescribed for women during breastfeeding. 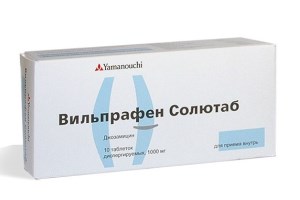 The active ingredient of pills "Vilprafen is also the antibiotic group macrolides – josamycin. It is able to accumulate in the lung tissues, which has been successfully used to treat not only genital Mycoplasma, but also typical of mycoplasmal pneumonia in children and adults. This is one of the few funds thatprescribed to pregnant women with mycoplasmosis. But to weigh the possible risks and benefits of treatment still stands.

"Vilprafen" mycoplasmosis can lower the efficacy of other antibiotics, therefore it is not used in combination with antibacterial drugs. Also, it can reduce the effectiveness of hormonal contraceptives, which should be considered in the treatment.

"Azithromycin and Erythromycin" inhibits protein synthesis in microbial cells. But its peculiarity is that the drug is accumulated inside host cells in the lysosomes. Therefore, it is best suited for the destruction of intracellular parasites, including Mycoplasma. "Azithromycin" well absorbed in the gastrointestinal tract, the system displays the long-term, making one tablet is enough per day to achieve effects.

Another advantage of this drug mycoplasmosis is that it in the highest amounts accumulated in the site of inflammation, i.e., less impact on healthy tissue. This allows you to avoid the side effects. However, patients with renal and hepatic insufficiency "Azithromycin" mycoplasmosis is contraindicated, since it imposes on these organs increased load.

"Doxycycline" is also often prescribed in the treatment of mycoplasmosis, as it is well distributed in organs and excreted slowly, providing long lasting effect. Usually it is administered after meals to avoid gastric mucosal injury.

"Doxycycline" is contraindicated for children under 9 years of age and women during pregnancy. This is due to the negative effect of it on the child's teeth with the formation of blemishes and defects (tetracycline teeth). In addition, the drug causes increased sensitivity to UV light, which is desirable to avoid prolonged stay during the treatment in the sun.

Since Mycoplasma is rarely causes disease on its own, to treat it is a good idea in combination with other infections.

Most of all, the Mycoplasma is accompanied with trichomoniasis, chlamydia and ureaplasmosis. "Trykhopol", active ingredient which is metronidazole, effective immediately against all of these microorganisms. It inhibits the formation of nucleic acids, significantly inhibiting the growth of bacteria.

Unlike other medicines, "Trykhopol" compatible and even enhances its effectiveness while the appointment with other antibiotics, for example, with "Azithromycin", "Doxycycline" or "Vilprafen". The drug may color the urine a dark color due to the presence in its composition of the dye.

To increase the concentration of the antibiotic at the site of inflammation it is recommended to Supplement the pills local treatment. And candles are available for women (in the form of suppositories), and men (in the form of urethral sticks).

Treatment should always occur in combination with oral medication, otherwise it will give only temporary results. The exclusive use of the suppositories is recommended only for pregnant and lactating women, when systemic treatment is contraindicated.

The active ingredients of the candles from Mycoplasma are the same antibiotics that are taken in tablets (trihopol, azithromycin, doxycycline, vilprafen). Also frequently given suppositories "Hexicon" that contains chlorhexidine (an antiseptic).