Limfogranulema also called fourth venereal disease, as it was opened after the syphilis, chancroid and gonorrhoea in 1913, currently in Europe the disease occurs sporadically and is more common in tropical countries of Africa, South America and Asia. As with other sexually transmitted infections, lymphogranuloma characterized by sexual way of transmission, while the household path is not proven.

From the moment of infection before occurrence of the primary lesion takes place from 3 to 12 days. Then place the introduction of chlamydia appear vesicles which quickly burst with the formation of erosion. Such a defeat is very similar to genital herpes and is often hardly noticeable for patients.

Sometimes the appearance of primary cells is accompanied by mild symptoms of intoxication: low grade fever, chills and weakness. These symptoms last for the entire initial period (1-2 months).

Secondary period is characterized by the emergence of lymphogranuloma reaction from the lymph nodes. They grow, become painful, and then are soldered with the skin. Next is the abscess, a breakthrough of pus through the skin and further scarring of the defect. Simultaneously, colonies of the causative agent of lymphogranuloma spread through the lymphatic system into the blood. The skin appears allergic rash erythematous.

If the patient has not started treatment khlamidiynoy lymphogranuloma in the secondary period tertiary period hard complications. Chlamydia multiplies in the internal organs and leads to disruption of their functions. Develops meningitis, pneumonia, myocarditis or sepsis, which can lead to death. Violation of lymphatic drainage is often the cause of progressive "elephantiasis" of the genitals. And the growth of scar tissue leads to the formation of adhesions, and even atresia of the urethra.

In men the primary lesion appears on the penis, the scrotum or the mucous membrane of the urethra. In women, the blisters and erosions can occur on the labia and the clitoris and inside the vagina. Sometimes the primary lesion in women is on the cervix. 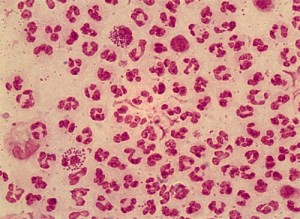 Like all sexually transmitted infections, chlamydia lymphogranuloma can affect the mucous membranes of the mouth and rectum of both men and women. In this case the primary element immediately has the appearance of erosion as the bubble immediately bursts.

In the secondary period, when the autopsy of nodes with exudation wounds, in their place, can form a fistula. Sometimes even occur genito-rectal anastomosis (messages) between the vagina in women and the rectum).

Diagnosis and treatment of disease

The symptoms are not sufficiently characteristic, therefore, always requires laboratory identification of chlamydia. However, due to the small size to fix of the pathogen microscopically too. Therefore, in the primary period using serological tests that can detect antibodies to the causative agent. In subsequent periods the study taking discharge from the fistula and carry out the cultures.

However, these techniques are often inadequate for verification of chlamydial granuloma. The identification of this pathogen in the biological material of the patient doesn't confirm 100% the diagnosis of lymphogranuloma.

The fact that the same microorganism causes normal urogenital chlamydia, they are two completely different diseases. Therefore, the patient is often required to take numerous tests to exclude other sexually transmitted infections. The sooner you start the treatment of granulomas, the easier it is to prevent its complications. For antichlamydial therapy antibiotics are used in combination with interferon drugs.

In the secondary period are often required surgical intervention, autopsy and purulent drainage of lymph nodes. In the tertiary period the treatment is detoxification therapy. Topically for sores to apply ointment-based antibiotic, and scars - remedies to dissolve and prevent the formation of adhesions.