Deciphering x-rays for stones in the kidney

In this sample, a smear on the flora (the customary abbreviation of the full name - microscopic examination of cervical, vaginal and urethra) there are no deviations. Presents the reader version of the rules.

The rate of discharge should not be discovered gonococcus, Trichomonas, chlamydia elementary bodies, the key cells.

Normal flora of the vagina is represented by sticks of Doderlein, which microscopically describe how gram-positive rods. These organisms maintain an acidic environment, which is the most important element of nonspecific immunity of the genital organs.

Microscopy allowed a small amount of mucus smears, the number of leukocytes in the urethra should not be more than 5, in the cervical canal is more than 25-30, the vagina is more than 10 in sight. Following is the example of candidal vaginitis (thrush). 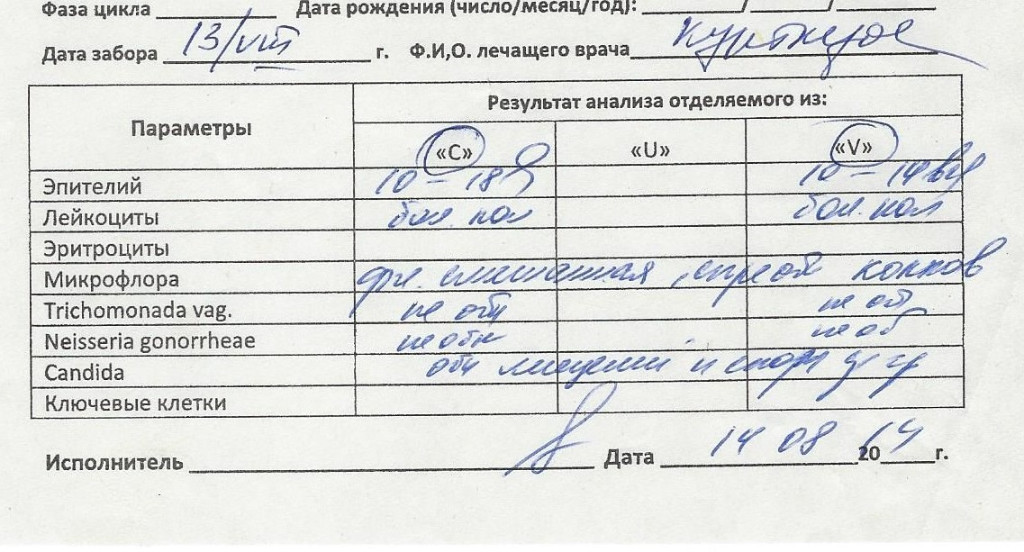 This sample (figure 2) is the result of microscopy of discharge from cervical canal and urethra. On the form you can see a significant leukocytosis, disturbance of flora with a predominance of coccal forms, furthermore discovered the mycelium and spores of yeasts of the genus Candida.

After visual inspection of the gynecologist, the patient is likely to be the diagnosis of candidal vaginitis (vulvovaginitis, vaginitis) and appointed antifungals.